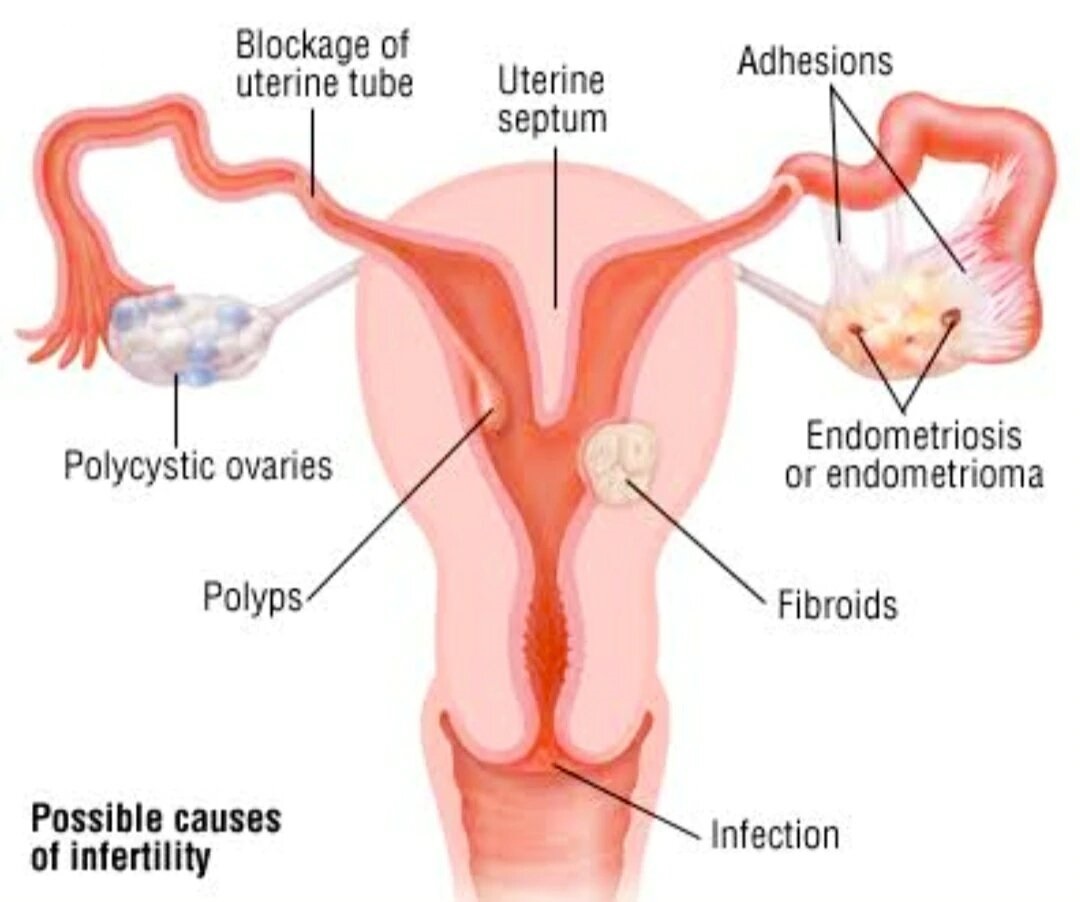 In about 45% of couples, the female partner is responsible for infertility or subfertility. Women are born with a finite number of eggs. Thus, as the reproductive year's progress, the number and quality of the eggs diminish. The chances of having a baby decrease by 3% to 5% per year after the age of 30.

As the conception take place in the fallopian tubes, a healthy fallopian tube is a must. If the tubes are damaged due to infections like chlamydia, gonorrhea or tuberculosis, it may prevent the sperm from reaching the egg and thus fertilisation and pregnancy cannot be achieved. If the tube is removed for some reason(ectopic/hydrosalpinx etc) then it is difficult for the lady to conceive. Tubal damage prevents the embryo from reaching the uterus and thus increase the possibility of ectopic pregnancy.

It is a condition in which the endometrial tissue (lining of the uterus from inside) grows outside the uterus. It causes difficulty in conception due to disturbed tubovarian relationship, poor quality of the eggs. But today with the advent of laparoscopic surgery majority of the patients with endometriosis can conceive. However, the success rate of IVF is reduced by the presence of endometriosis.

As the embryo has to get implanted into the endometrium before it can grow for nine months in the uterus any issues with the endometrium or uterus such as adhesions, septum, polyp or fibroids can cause infertility. The majority of these problems can be treated effectively.

Cervix is the opening of the uterus that opens up in the vagina. It is lined with numerous small glands which produce cervical mucus that provides nourishment for the sperm. Once sperms are ejaculated in the vagina they swim through this mucus into the uterus. If this mucus is inadequate, the sperm cannot reach the uterus and fertilize the egg.

Our immune system works to defend the body against harmful enemies. In couples with immunological fertility issues, their body identifies the part of reproductive function as an enemy and sends natural killer cells to attack. A healthy immune system would correctly identify only an enemy and attack foreign invaders like bacteria, parasite, virus and more.

At Yash IVF we try to find out the exact cause of infertility as the majority of the above mentioned causes can be treated effectively.