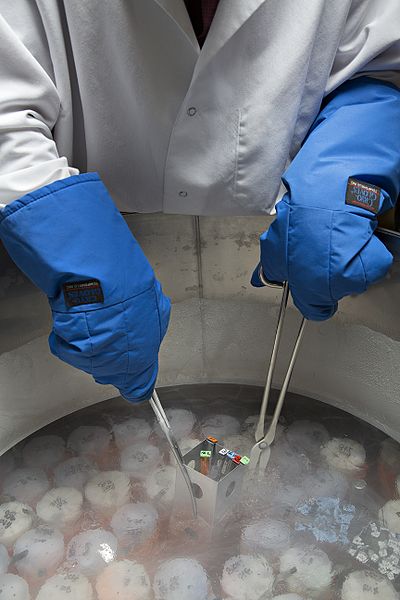 Cryopreservation is a technique that is used to freeze and thaw the eggs, sperms, or embryos that can be used in in-vitro fertilization (IVF). This technology has been employed for decades in various medical disciplines. It involves the freezing of biological material at extreme temperatures, at which all biological activities of the cells cease completely. It halts even the biochemical reactions that can lead to DNA degradation and cell death. The temperature used is as low as -196 °C/-321 °F, and the commonly used medium is liquid nitrogen.

In the field of ART, Cryopreservation technique is used to freeze and thaw the eggs, sperms, or embryos that can be used in in-vitro fertilization (IVF).

Applications include the use of frozen sperms, post thawing, for IUI (Intrauterine insemination) procedure and for fertilization of the harvested eggs (oocytes) during IVF treatment.

Cryopreserved eggs can be used for repeated IVF cycles in the woman from whom they have been harvested, or in another woman (Donor egg IVF).

Extra embryos generated during IVF treatment can also be frozen to be used later if the IVF cycle fails or subsequently for another issue. Embryo donation is also a technique used for helping childless couples conceive, if their own gametes are unable to generate a viable embryo.

The common question that is uppermost in people’s mind is regarding the safety and success of this technology.

Rest assured, this is a safe and proven technology. In fact, success rates are higher with frozen embryo transfer. The reason being, it allows the IVF expert to transfer the embryos when the recipient lady is in the best condition to receive the embryos, in terms of her endometrial lining and Hormone levels.

More importantly, it allows your treating doctor to freeze the additional embryos so that in the event of an unsuccessful first cycle, the next transfer can be accomplished without the trouble of another stimulation and pick up process and at a much lower cost too.