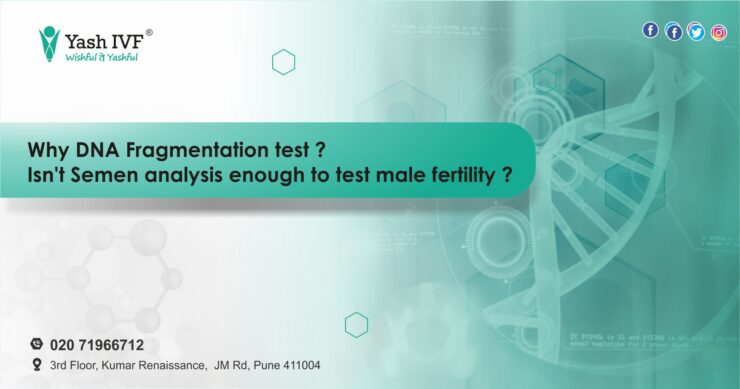 Semen analysis only indicates the quantity and motility of the sperm.

DNA Fragmentation of sperm gives a clear idea of three percentage of sperms with broken or damaged DNA, which can cause male fertility, and miscarriage.

Research has established a close link between DNA integrity and fertility, so it is important to know in depth about DNA fragmentation. The sperm DNA damage is expressed as DFI (DNA Fragmentation Index) which shows the impact on the fertility potential of the man.

Did you know, even healthy sperm may have some DNA damage but it is the degree of damage present that matters?

It is well known by now, that DNA fragmentation of sperm leads to male factor infertility, IVF failure and miscarriages. DNA has the supreme power of manufacturing and processing information throughout the generations while maintaining identity.

The job of sperm is not merely limited to achieving a pregnancy. Sperm quality has a 50% role to play in avoiding miscarriage & other complications. 50% of the baby’s DNA is from sperm, that’s why the quality of sperm matters.  As new sperm are formed every 65 to 75 days, it is relatively simpler to optimize sperm quality. It affects the future of the child much after birth. it is necessary to monitor the DNA fragmentation of sperm.

So, let’s talk about DNA fragmentation and how it impacts fertility.

The sperms are the most motile cell of the body, continuously made and released. Sperm contain DNA, a helical structure with 2 strands wrapped around each other. This DNA stores the genetic information and provides directions to make proteins and other substances in the body.

DNA is made up of chromosomes. The human body contains 46 chromosomes, and sex cells (eggs & sperm) contain just 23. When the egg and sperm are fused, these strands get separated. This is a process of multiplication and this is the step where errors can happen in DNA.

DNA Fragmentation is the outcome of poor sperm health.

DNA Fragmentation can be a single-strand DNA break

Base deletion or modification

Interlinking of the strands

Do you know, adult sperm cells don’t grow or divide, unlike other somatic cells? The sperm head has a large nucleus &lacks cytoplasm. Sperm cell has reduced cell mass ,that is why prone to DNA fragmentation.

Who can derive Benefit from sperm DNA testing?

Since advancing male age has a powerful effect on Sperm DNA quality, men above 40-45 years who have trouble conceiving  are, often  advised to undergo a sperm DNA fragmentation test

Couples with a history of unsuccessful ART

Couples with a history of miscarriages, early pregnancy losses

Varicocele along with exposure to harmful substances

Consideration of freezing   the semen samples

Do you know, previous episodes of high fever, urinary infections, mumps and TB too can also cause Sperm DNA fragmentation?

What are the causes of DNA fragmentation?

Scientific research has discovered a proven link that causes DNA fragmentation, which is as follows.

Oxidative stress can occur due to infections like Pyrexia, genetic disorders, stress, cigarette smoking, alcohol, drug abuse, and advancing age, exposure to harmful substances or pollution in the working environment, a varicocele, stress, and poor/unhealthy diet.

Both are complementary, rather sperm analysis is the first test that determines the quantity &quality of the sperm. Sperm analysis focuses more on the physical parameters of sperm like semen volume, PH, size, shape and motility. A deeper analysis of sperm DNA is been done only with Sperm DNA fragmentation.

A Sperm DNA Fragmentation (SDF): Test digs deeper into the genetic content of sperm and reports on levels of DNA damage which could be one of the overlooked causes contributing to Male Infertility.

How can we detect sperm DNA fragmentation?

There are diagnostic tests for measuring fragmentation levels.

There are accurate tests available which can detect DNA Fragmentation,like

COMET assay:  is used to detect sperm DNA damage by chemically breaking down the sperm sample to release the DNA and testing it by examining the number of DNA breaks in the sample.

What next, after sperm DNA fragmentation detection?

There are evidence-based treatments for improving sperm health. As the damage is primarily caused by oxidative stress, the best treatment is the use of antioxidants.

Such treatments with antioxidants for 2-3 months can reduce the levels of sperm DNA fragmentation by 20%.

The IVF-ICSI technique with sperm from the testicle is recommended if earlier supplementation is inadequate. As explained above, IVF with ICSI is the most adequate fertility treatment for couples trying to conceive without luck and having high levels of sperm DNA fragmentation.

Can sperm DNA fragmentation be improved?

Yes, following a treatment based on antioxidants along with vitamin supplements of C, E, and A. However, the chances of success depend on the degree of DNA fragmentation. In the most severe cases, when the per cent of DNA fragmentation is above 30%, pregnancy can only be achieved using IVF/ICSI.

DNA Fragmentation can predict future infertility, chances of miscarriage & ART outcome. An alternative solution for men with high fragmentation is the advocacy of donor sperm.

We at Yash IVF have gathered excellence in DNA Fragmentation induced Male infertility. Do visit us to know more about achieving the parenthood with assistance well in time.