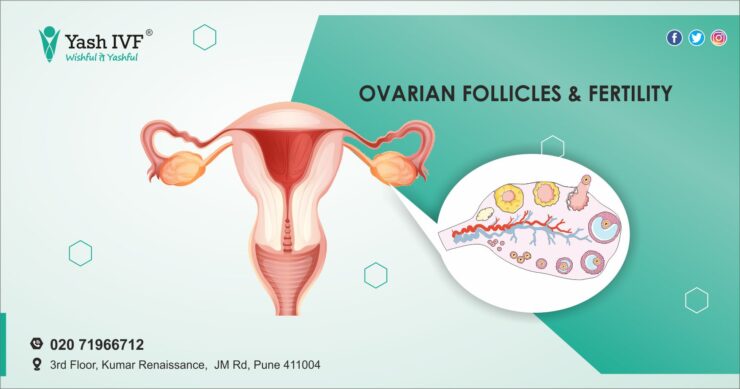 When a couple visits an infertility specialist, the first test that is immediately performed is a pelvic ultrasound to assess the Antral Follicle Count (AFC). The terms ‘follicle’ and ‘egg or oocyte’ are going to be mentioned very often.

Let’s understand the importance of such terms in fertility treatment.

A pelvic ultrasound will reveal the size and number of follicles present in the woman’s ovaries. This is called an Antral Follicle Count.  The results of this scan along with blood tests like AMH will assess your fertility and therefore women’s ability to conceive.

What and where are ovarian follicles?

Ovarian follicles are small sacs filled with fluid inside a woman’s ovaries. These follicles secrete hormones which are important for the menstrual cycle and women begin the journey of puberty with about 300,000 to 400,000 of them. Each of these ovarian follicles releases an egg for fertilization. Follicles and their size and status are vital in assessing fertility and fertility treatment.

Follicles are the functional structures of the ovary. The egg is the cell which will be matured in the inner wall of the follicle through a spontaneous or stimulation cycle. Follicles also produce estrogen, which is required for egg development, maturation and release.

The quality of eggs is determined in the first weeks of the life of the female embryo. From menarche which is the first menstruation, there will be a section of egg in each cycle. Higher quality eggs are the first to be selected along with time, the eggs of the successive cycles have inferior quality than the previous one. This process of selecting of the best quality egg is the most natural one that’s why older women have more difficulty getting pregnant and have a higher miscarriage rate.

How to know about the power of follicles to produce eggs?

This is called as Ovarian reserve, which can be analyzed by measuring hormones like FSH, LH, estradiol etc) and vaginal ultrasound in various forms.

This follicle reserve is expressed in several follicles per ovary, often seen in the first days of the cycle (2nd to 5th) with the help of vaginal ultrasound. These follicles are called “antral”. With the help of ultrasound, one can observe and monitor the evolution and growth of follicles in natural as well as stimulation cycles.

An evaluation of follicles involves a pelvic ultrasound scan of the uterus and ovaries as well as an Anti-Mullerian Hormone blood test.

How many eggs are there usually in follicles?

During the normal menstruation cycle, one follicle contains one egg that raptures& is released during ovulation. This entire process takes around 14 days after the imitation of the menstruation cycle. Mostly, all follicles will release an egg. The real concern is the maturation and quality of the egg for fertilization.

How many follicles are to be considered normal?

It is equally hard to say how many follicles in each ovary are normal because the primordial follicles (known as primordial until they begin to develop) are tiny and can’t be seen and picked up on any test. Although many follicles can start to develop with each cycle, usually just one follicle will release an egg, while the rest follicles disintegrate.

How fast do the ovarian follicles grow?

Follicles develop for several months, as follicles will be in different stages of growth before they are ready to release the egg at any given time. Within a woman’s lifespan, many follicles will begin to grow, but most of them will not attain the desired maturity and will degenerate in a process called atresia. This is the way the selection of the best egg will happen by the body.

A woman is considered to have a normal ovarian reserve if the antral follicle count is 6-10. If the ovarian count is less than 6, the ovarian reserve is low, whereas a high reserve is greater than the 12 ovarian counts. These tests only show the visible antral follicles and not the total number of follicles. However, this can be a good indicator of the number of eggs a woman has as reserved.

Overall, the number of follicles is relevant to the women’s general health and lifestyle. More follicles do not mean successful fertilization. Many women with fewer follicles can still conceive with IVF as the quality of eggs is more important.

Which Conditions can affect follicle health?

1. Polycystic ovarian syndrome (PCOS): 8-10% of reproductive age women are affected by PCOS. PCOS can cause increased androgens and an excess of immature ovarian follicles in their ovaries. PCOS prevents follicular growth and maturation, so they cannot release egg cells.

Primary ovarian insufficiency occurs when the ovaries stop working before age 40 which results in irregular periods and reduced fertility. It may happen in women having low follicles count and in some people, this can start during adolescence.

Ovarian follicles are the main centre for hormone secretions, estrogen. This allows the cushioning of the uterus wall for pregnancy.

How to improve ovarian follicle health?

By eating a healthy diet, avoiding/eliminating smoking, maintaining a healthy body weight and BMI, reducing stress, improving blood flow and opting for fertility supplements under the guidance of a fertility expert.

Do talk to us, if you have symptoms such as irregular bleeding, pelvic or, back pain, or wish to know more about their fertility.