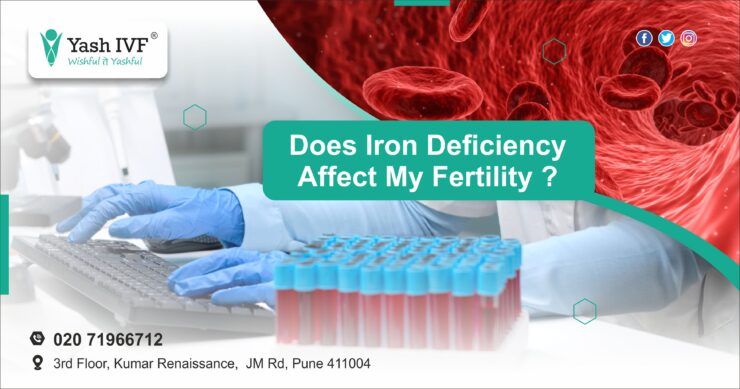 We have heard the most common term, iron deficiency. Today, a lot of research has gone into understanding the impact of iron deficiency beyond fatigue and reaching a state of the global epidemic. All over the world, many women go through the entire pregnancy without attaining the minimum required intake of iron. In this blog, we will discuss the link between iron deficiency and fertility.

Extensive works of the literature revealed that iron deficiency is a global nutritional problem affecting up to 52% of pregnant women. Many of these women are symptomatic. Evidence quote that Lack of proper weight gain during pregnancy is an important predictor of iron deficiency.

Is anaemia, merely a symptom?

Anaemia is usually defined according to haemoglobin levels (Hb level), which may vary with age, gender, and ethnicity. Haemoglobin level below 13 g/dL for males, and below 12 g/dL for females is considered abnormal.

Haemoglobin levels of less than 11 g/dL at any time during pregnancy are considered anaemic. Once anaemia is recognized, the possibility of iron deficiency should be considered.

Iron deficiency usually develops silently over time and may not show any symptoms. Once iron stores are completely depleted, symptoms of anaemia appear.

Why iron is important to overall health?

Iron is important for the transport of oxygen. An average individual has 3-5 grams of iron in their body. After absorption, iron gets attached to protein and is transported into the bone marrow for the production of red blood cells. Excess iron is stored as ferritin, an easily available provider of iron.

How and to what extent does iron deficiency impact fertility?

Iron deficiency is the most common condition that affects many people around the world.

When you are anaemic, there are insufficient numbers of red blood cells which are important for oxygen supply to the reproductive organ. In addition, a lack of iron can cause weakness in eggs stored in the uterus over time.

Without a healthy egg, the conception process is almost impossible. It can also induce complications, including preterm birth, prevent proper placental development, as well as energy loss for the mother.

Another concern of anaemia is heavy periods, which lead to blood loss over an extended time, depleting iron stores. Hormonal imbalance, uterine fibroids or even an IUD may cause these issues.

A study published in the International Journal of Current Research and Academic Review found that women who do not get sufficient iron may not have proper ovulation. Lower iron levels in women also result in poor egg quality which reduces fertility by 60%.

What are Iron Deficiency symptoms?

Iron deficiency is the most common and easily correctable nutritional deficiency for women of reproductive age due to menstruation. Along with fatigue and low energy levels, it significantly impacts fertility. Iron deficiency and fertility often go hand in hand.

How iron deficiency is linked to fertility?

Iron deficiency anaemia may cause anovulation. Iron deficiency has closely linked to infertility, miscarriage, low birth weight, and preterm labour. As we all know, when we don’t ovulate, pregnancy becomes rather difficult.

Even if, any woman with iron deficiency becomes pregnant, lack of oxygen affects the baby’s as well as placental development and increases the rates of miscarriage and preterm birth.

What’s the difference between ferritin and iron?

Iron cannot exist on its own, rather it binds to a protein called transferrin, which transports iron to different parts of the body. Extra iron is stored in ferritin, which is concentrated in the liver along with cells of the immune system.

Are you iron-rich? Let’s know the values.

Laboratory values for the normal ferritin level  are:

No wonder, the powerful women were called iron ladies!

In nutshell, the Iron requirement is for the lifetime. In the case of a woman, whether she is young, menstruating or trying for conception, the requirement of iron is of great importance. There are many treatments available depending based on the medical history of women and the current state of iron.

Every face of anaemia can be conquered at any age with medical advancement, and easily available diagnostic tests.

Tubal Surgery or IVF, If My Fallopian Tubes Are Blocked?

Can Stress Cause Infertility?

How To Improve Egg Quality?