Why Is A Second Pregnancy Eluding Us? What Should We Do? 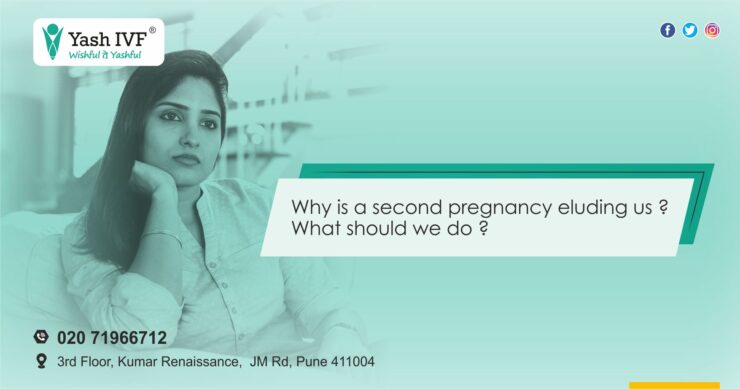 One of the most frequently encountered situations is couples with an earlier successful pregnancy, now unable to conceive and get a second child. “Why am I not getting pregnant again? I already have a child”, is a common enquiry we deal with.

The real challenge is the acceptance of infertility setting in & that is exactly what we call “secondary infertility”. These incidences of secondary infertility are related to either the current medical health conditions of the couple or change in lifestyle since earlier pregnancy, inculcation of habits like smoking, etc.

Let’s see, what could be the issues that have croppedup since the first successful pregnancy, leading to this condition of secondary infertility.

The main causes of secondary infertility are similar to those of primary infertility, like tubal block due to some known/ unknown infection, endometriosis (tissue growth outside the uterus), uterus fibroids or polyps (growth in the muscular wall of the uterus), pelvic infections and surgeries, PCOS, altered sperm health with changing lifestyle, habits issues

The most natural impediment would be age. Do you know how age impacts fertility? Fertility  in women decreases with advancing age, significantly after 35 and may induce miscarriages even if conception occurs.

Progressive Endometriosis is a major contributor too, as the endometrial lining outside the uterus responds to hormonal changes and scar tissues further complicate the implantation process.

Scar tissues from a surgical procedure that may have been carried out post the first birth.

Previous gynaecological or abdominal procedures often cause This scar tissue does not allow attaching to the lining of the uterus. Removal of the removal ofscar tissues by using laparoscopic surgery along with IVF is the most widely used treatment.

Sexually Transmitted Infections: These infections create inflammation and a toxic environment. When left untreated, it can lead to scarring of the Fallopian tubes and prevent natural conception. These infections are due to the invasion of pathogens and can happen at any age.

Weight gain, another common occurence, can also result in infertility.

A recent finding among men is that excess weight causes a rise in male estrogen levels, which can negatively affect sperm production and can cause secondary infertility.

How long does secondary infertility last?

Can a C-section cause secondary infertility?

Roughly 20% of women who gave birth via cesarean section reported difficulties getting pregnant with a second child as  C-section causes scarring, and can cause inflammation or obstructions that can make becoming pregnant more difficult.

How do you investigate secondary infertility?

Tests for the evaluation of the uterine cavity and tubal patency are performed. These may range from relatively simple transvaginal Sonography to SSG (sonosalpingography),  Hysteroscopy or Laparo-hysteroscopy with biopsy.

There could be other conditions like Diabetes, PCOD, Endpmetriosis issues, etc, which may have been in control earlier but have since become more serious and are interfering with conception or carrying the baby to full term.

Co-morbidities to be cured (if curable), neutralized or brought under control first if incurable,      or surgically managed if medicines are not effective.  Assisted reproductive technology       (ART) may be used to speed up or facilitate the process of conception.

Medications are often used to correct or control hormonal imbalances and other conditions like thyroid, diabetes, PCOS.

Surgery is effective in the case of uterine fibroids, uterine scarring, or advanced endometriosis. Many of these procedures are done laparoscopically, which is minimally invasive and leaves few scars, does not disturb the internal physiology too much and does not interfere with the conception & child bearing process.

We at Yash IVF have successfully treated many such couples with secondary infertility. One such success story of parenthood is that of Mr and Mrs Joshi. In May of 2017, she had given birth to a healthy son.

“It was just so easy. We waited like three years and thought, ‘Let’s try again.’ But getting pregnant with a second child wasn’t a joyous ride.

Investigations showed the presence of multiple intrauterine fibroids, which had formed and grown since the first pregnancy. It was with Laparoscopic surgery for fibroids (Myomectomy) followed by  IVF that we, at Yash IVF, could offer the joy of parenthood for the second time.

To conclude, secondary infertility is not uncommon.  It can be managed. At Yash IVF, we are particularly good at managing co-morbidities like Fibroids, Polyps, Endometriosis, and Cysts in the ovaries that require Laparoscopic or Hysteroscopic surgery.